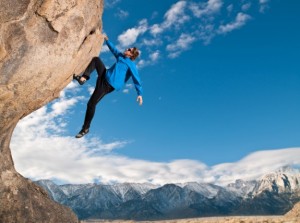 In the words of author Nathaniel S. Summers, “The strength of a person is often weighed by how they deal with their weaknesses.” By way of example, I’d like to share a true story with you.

In high school I ran middle distance competitively. We trained with the Connor brothers, whose father was our coach (names changed to protect their identities). The elder brother, Doug, was a very good runner, but not the best, while the younger brother, Wayne was a phenomenal athlete. Because Doug had less natural talent, he had to work much harder than Wayne to do well. Doug trained longer and harder, never missed a training session, and he didn’t let defeats by stronger athletes get him down. Wayne was exactly the opposite. He relied on his inborn talent to win. He lost interest in running whenever he didn’t win, was often late for training or never turned up, and regularly stayed out late the night before races. Initially, Wayne won most of his races, while Doug occasionally won but usually came second or third. However, over the years that I trained with them, Doug’s commitment paid off. He became an exceptional athlete and outshone his brother Wayne. Why? Because Doug understood that he was competing against the very best athletes whose innate athletic talent exceeded his. To beat them, he knew he would have to make his mind stronger than his athletic ability and he would have to be supremely fit. That way, when the lactic acid pain set in over the last few 100 metres of the race, and more talented but mentally weaker athletes would start to fade, he could overtake them and win. Doug went on to compete in the Olympics. Wayne, on the other hand, faded into obscurity after high school, despite starting off with far more athletic potential than his brother.

There are some fundamental lessons that we can learn from this:

So what’s the bottom line? Each of us is a unique blend of talents. In his new book “What to do when you want to give up”, local entrepreneurship guru Allon Raiz talks about discovering your “secret sauce”, that special something that you are exceptionally good at and that’s hard to copy. Armed with this understanding and with lots of practice, you can become brilliant at your strengths. But accept that you’ll never be world-class at your weaknesses. To lead the pack, concentrate on your strengths and manage your weaknesses.

One thought on “Work on your strengths, manage your weaknesses”