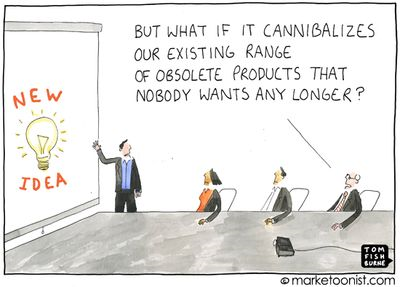 Prozac, a breakthrough treatment for depression, is one of the biggest-selling, most profitable medications of all time. Since its launch in 1988, Prozac accounted for US$ 21bn in sales and 34% of Eli Lilly’s revenues in that time. In essence Lilly was the house that Prozac built. However, the US patent for Prozac was coming up for expiry in 2001. Executives at Lilly knew that this would trigger such a huge loss of revenue that 2001 was known throughout the company as “Year X”. So how did Eli Lilly prepare for Year X? In South Africa in 1997, Eli Lilly introduced Lilly Fluoxetine, its own generic version of Prozac. But this would eat into sales of Prozac. Why would Eli Lilly conceivably do such a thing?

Inevitably, markets are cannibalised. As business leaders, we have a choice: we can either cannibalise our own business lines, or we can enable existing or new competitors to cannibalise it for us. With pricey Prozac coming off patent, it was inevitable that other pharmaceutical companies would jump in to claim their share of the very lucrative antidepressant market. Rather than let competitors grab its Prozac market share with generics, Lilly chose to bring out its own generic. The thinking was that Prozac users could be converted to the cheaper, chemically similar Lilly Fluoxetine, rather than to the competitor antidepressants, and this would prevent some of the Prozac fallout. It was a smart strategy and helped Lilly stay in the antidepressant game.

So why should you cannibalise your own business? And what can happen if you don’t?

Failing to cannibalise your own products can sometimes be disastrous. A well-known case is Kodak’s bankruptcy as a result of the company’s failure to adapt to the onslaught of digital cameras. But what is less well-known is that four decades ago, Steven Sasson actually invented the world’s first digital camera for Kodak. The size of a small coffee machine with a cassette on the side, it was hard for anyone to imagine that this would evolve into the handheld digital cameras that most of us own today.

When digital cameras first started to gain momentum, Kodak had the opportunity to grow into this new market. However, the company mistook it for a passing fad. It couldn’t comprehend that people would be happy with the quality of digital photos that you could get (then), as compared to the quality of photos from film. Kodak failed to grasp two fundamental aspects of human nature that digital photography would tap into:

1)     People liked the convenience of seeing their photos instantly, and
2)     Prior to digital, rolls of film meant that photography was a costly pursuit, making it largely the domain of professional photographers. The mobile phone, particularly the smartphone, has made digital photography accessible to the masses because photography has become cheap and easy. Now we can take as many photos as we want and share these, and the costs of photo-printing no longer stand in the way of everyone becoming a mass-photographer. Whenever a momentous event happens, thanks to digital, we can all show that “we were there”.

Because Kodak didn’t recognise how digital would change the world of photography, they stuck with what they knew: making film. And so the world overtook the company. Kodak allowed others to cannibalise its film business instead of the company cannibalising it itself. Fast-track to 2012, when Kodak filed for bankruptcy. In that same year, according to Samsung data, 2.5 billion people worldwide had digital cameras.

Yes, hindsight makes us all experts on Kodak’s mistakes. But without the benefit of hindsight, reinventing your business is a lot easier said than done. As business owners, we become emotionally attached to the products we have created or the services we deliver. This makes it that much more difficult for us to put them to death, or to recognise that the world is leaving them behind.

Yet, it is critical for us to innovate and constantly stay ahead of our customers’ needs and demands, adapting our products and services accordingly. Even if this means sacrificing a successful parent offering to make way for its newer, sexier offspring.

Apple does this extremely well. When the iPhone was launched, some feared that it would cannibalise the existing iPod market because all the iPod functionality had been integrated into the iPhone. However Apple was prepared to make that compromise in return for the much larger opportunity that the iPhone represented. Similar thinking drove Apple’s strategy to launch the iPad, even though this could well erode the sales of its portable computers.

Every so often a CEO must make some very significant decisions about closing the door on existing business lines. A great example of this dates back to the Eighties, when Andy Grove of Intel made the call to walk away from the DRAM business in favour of microprocessors. At that time, DRAM was Intel’s major product. However Grove had the business savvy to recognise that microprocessors were the future.

When business leaders explore ways to grow their companies, someone typically proposes a plan that would attract an under-served slice of the market. The company has out-grown certain customers, or a new segment is not buying the existing model. Could these represent new markets? Just think about the debates between Kodak executives when digital cameras started to take off and film sales were dropping.

In these meetings, however, executives usually fall victim to the “We can’t cannibalise our own revenue” trap. Their response is usually along the lines of “No, we cannot launch a separate business model to serve these segments because it would eat into existing revenues, and that would spell business suicide”. Because of big corporates’ relentless drive to grow revenue every year, it is difficult for them to sacrifice the current, known bestseller in favour of tomorrow’s maybe-blockbuster. In large corporates, the risk appetite for an unknown is often not there. And so, like Kodak, many companies underestimate the rate and extent of technology-driven change in their industries and are slow or in denial about the need to cannibalise their current business lines.

Cannibalising today’s business effectively means creating an entirely new business for tomorrow. To do this well, one of the keys is to do it before you need to. If you postpone until your platform is burning and you have no choice but to jump ship, then you must keep your core business going at the same time as creating something new. And that’s extremely hard, if not impossible, to do.

The newspaper industry is faced with this very challenge today and is battling to remain afloat. US newspaper sales from job ads have dropped a staggering 92% in a decade.

Back-track to the last decade, to a time when the newspaper that arrived in the post or that was thrown over our gate, was crammed full of advertising. There would be a jobs section, a classified section, a travel section and a cars section with more advertising. The Sunday Times is a case in point. I can remember when it contained two thick sections for job ads. Then this became a single Careers section. As this got progressively thinner, so the Sunday Times merged the Careers and Money sections into one paltry section.

With significantly more resources than any start-up, backed by century-old brands, and with the foresight to recognise what was happening to their industry, how could the newspapers manage to destroy a $10bn revenue stream? Why didn’t they adapt their business model, their organisational structure and their people to the Internet age?

The sad truth is that they didn’t want to.

Newspapers’ online ads competed against their own print advertising. And competing with your own business is extremely painful.  It means the executives, structures and processes consistent with the old way have to be let go of or removed from the picture.  An entirely new set of people, who aren’t existing staff, must be hired, trained, and put in positions of power in the organisation. Newspaper executives recognised what needed to be done to compete effectively in the Internet era. However they were too scared to challenge the leadership responsible for the past.  The industry’s downfall was due to a lack of courage, not a lack of clarity.

In the words of late US President Ronald Reagan, “There are no easy answers, but there are simple answers.”  The newspapers knew the simple path to success, but chose the easy path to failure.

The question is: are you making the same mistake with your business? And do you have the courage to cannibalise your business today, in order to keep it ahead tomorrow?

6 thoughts on “Cannibalise your business before someone else does”